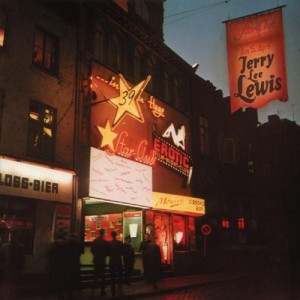 This is Jerry Lee Lewis and The Nashville Teens playing at the Star Club in Hamburg, the date is 1964 and the performance?  Well… possibly the most violent, feral and explosive live albums I’ve ever heard.  Really, the energy that bursts out of this is just so powerful and suddenly it’s easy to see why just so many people found Rock’n’Roll absolutely terrifying.

How come a concert recorded in a club in Hamburg by the head of the jazz department at Phillips Records sounds like this!?

Everything is loud. Siggi Loch (head of the jazz department) says it was a fairly simple recording.  He put microphones as close to each instrument as possible and then a stereo microphone in the audience to capture the ambience.  Maybe it’s the simplicity that makes it such an extraordinary sounding album.  It’s thunderous and unremitting.  The piano’s really loud and if you think you know what pounding drums sound like, buy this and think again.

It opens with a truly menacing version of Mean Woman Blues and doesn’t stop.  There’s a rabid, manic, borderline psychotic version of Money (that’s what I want) and it goes on from there.  The set list covers just about every classic Rock’n’Roll song you can think of, and all of them delivered with an energy and a power that makes them quite an extraordinary experience to listen to.  I was too young for Rock’n’Roll so I’ve always looked at it slightly from a distance.  Yes I’ve got Buddy Holly albums and I’ve got Elvis but this, this is different.  There is nothing remotely nostalgic about this.  I honestly struggle to think of a live album with quite this much energy and sheer power.  It’s also (in its own way) a remarkably good sounding album; loud and dynamic and on the right system, really physical.

The only problem?  It’s probably going to make everything you play afterwards sound just a little bit effete.   Nigel Finn

What albums get you rocking & shaking ?  Shoot us a line below….