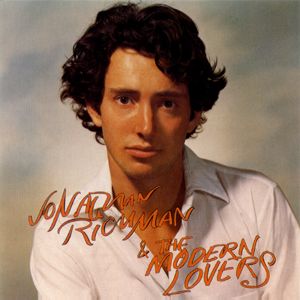 Summer Fun. Everyone, even me, needs something truly jolly, frothy and fun from time to time. It’s the hot weather that does it. Jonathan Richman & The Modern Lovers was released in 1976 but it’s not that straightforward.

The first Jonathan Richman album I remember was simply called The Modern Lovers and it was released around the time that the whole punk thing started happening. Most of The Modern Lovers was recorded in 1972 and produced by John Cale. It contained such gems as Roadrunner and Pablo Picasso – “He was only 4 foot 2 but girls could not resist his stare, Pablo Picasso was never called an axxxhole” – or one of my particular favourites – “he would drive down the street in his El Dorado and the girls would turn the colour of a ripe avocado”.  It’s a wonderful album: dark, paranoiac and with a very obvious Velvet Underground fixation. For one reason or another it wasn’t released until some years later. It’s extraordinary; there’s a good reason why Jonathan Richman is often called The Godfather of Punk. The thing is though, by the time it was released, Jonathan Richman had changed. He wanted everything quieter. Gone was the heaviness of The Velvet Underground and in its place was an altogether lighter and more innocent rock’n’roll. Drummers came and went, frustrated by constant requests to play quieter. Godfather of Punk he may have been but by the time punk actually happened, Richman was covering Chuck Berry songs and writing altogether more innocent and simplistic songs. This is what Jonathan Richman & The Modern Lovers is full of. The opening track, Rockin’ Shoppin’ Centre, contains some truly wonderful and strikingly original rhyming couplets. I have this terrible desire to spoil them for you but I’m not going to – but you do need to buy this album to find out what rhymes with the following: “I watched the people for a while, you always learn a little…” There are also such gems as Hey there little insect and Here come the Martian Martians. An album full of silliness, set to some great classic 50s-sounding rock’n’roll. The band are brilliant, with special mention to the guitarist who gets that wonderful clean rhythm chord thing that Chuck Berry does so well.

This is an album that’s going to make you laugh; hopefully for the right reasons. If you have them, and depending on their age, your children are either going to be entranced or horrified; your partner is likely to go the same way, as are your friends. This is also an album that’s capable of giving you such an insight into musicianship; everything is so simple, so stripped back, production is no more than it needs to be, likewise recording. I can’t recommend this highly enough for anyone who needs a bit of lightness and humour in their life.  Also, you really haven’t lived until you’ve heard the backing vocals on Hey there little insect.  Nigel Finn

What’s your summer soundtrack ? Let us know via the digi-electrickery below…

Hifi Cables – What Are They For?