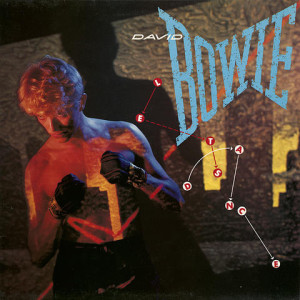 Ever get a song stuck in your head?  It happens to most people and every now and then it’s something really strange.  The only cure is to go play it until it’s un-stuck again.  Ever get an album stuck in your head?  I don’t think I’ve listened to Bowie’s „Let’s Dance” since it was released in 1983.  Even more curious, I never owned it, but for some reason it left its mark on me.  Sometimes, how and where and when you hear music is a lot more important than what you hear it on.  I remember where I heard this.  It was in someone’s car.   I can even remember where we were going but what really sticks is just how incredibly well „Let’s Dance” suited the time, the place and most of all the way I was feeling.  Music is a truly incredible thing.

So when David May, Technical Sales and passionate music enthusiast, mentioned that he’d ordered „Let’s Dance”, there it was, a whole album stuck in my head.  Couldn’t even wait for his to arrive, had to go out and buy it and I’m so pleased I did.  What makes it special?  Well, it could be the production.  „Let’s Dance” was produced by Nile Rodgers.  Enough said.  So you get Nile Rodgers on rhythm guitar and a certain amazing Texas blues guitar player by the name of Stevie Ray Vaughan playing lead guitar.  That’s a pretty good start to any album.  The songs are so strong as well. ” Modern Love”, „China Girl”, „Let’s Dance” and „Cat People”, any one of these tracks makes owning the album worthwhile, but all four of them make it a positive bargain.

My copy is a 24 bit re-master from 1999, which I thought was the most recent re-master there was.  Irritatingly though there is this, just released on a Japanese label http://www.amazon.co.uk/Lets-Dance-David-Bowie/dp/B00GZ3RQF8  My experience of Japanese re-masters is pretty good, and had I known, this is what I would have gone for.  That though would have meant waiting, and when you have a whole album stuck in your head, waiting is not good!  My 1999 copy sounds pretty good, which is interesting and says a lot about how much better CD players have got in the intervening years.

So did „Let’s Dance” deserve to be stuck in my head?  Oh yes.  Brilliant musicians, a great singer, really good songs, great production and Stevie Ray Vaughan at his very best, plus you even get Nile Rodgers’ bass playing partner, Bernard Edwards on one of the songs.  What’s not to like?

Postscript –  When I think about how much the earlier Bowie albums made an impression upon me at a very impressionable time, I was really surprised to discover that „Let’s Dance” is Bowie’s biggest selling album.

What’s your favourite Bowie song/album? – let us know by clicking your electric mice in the box below: