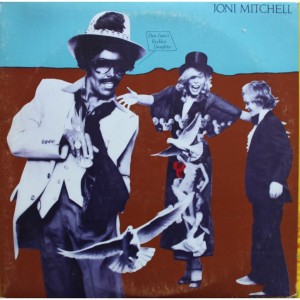 Why review a Joni Mitchell album originally released in 1977?  Well in truth, it was one of those Tuned ARAY moments. I was introduced to Joni Mitchell’s music by my parents and grew up just assuming purchase of every album as it was released. In a funny way, „Don Juan’s Reckless Daughter” was the most challenging and I think I probably played it a couple of times and then put it to one side. At some point though, it re-appeared and it re-appeared at a time when I knew a lot more and had a far greater understanding of music than I did in 1977.

I’ve been playing Don Juan’s Reckless Daughter for the past couple of weeks. On a good system, it’s astonishing in so many ways. First of all, it’s very experimental. The opening track, „Overture – Cotton Avenue” begins with multiple tracks of acoustic guitar, typically in Joni Mitchell’s altered tunings. Lots of reverb, lots of space, before the other musician (who really makes this album so special) comes in. That person is Jaco Pastorius, one of the greatest fretless bass players ever and on Don Juan’s Reckless Daughter he just shines.  The nature of the songs and Joni Mitchell’s open tuning guitar playing give him space to stretch but they also give him a clearly defined, melodic structure in which to work. „Overture – Cotton Avenue”, with its extraordinary fretless bass lines (fluid beyond reason) is almost enough justification for owning Don Juan’s Reckless Daughter and the recording quality is outstanding.  You are though going to need a system that does timing.  That way you get to hear the magic that obviously exists between the two musicians. Track 2, „Talk to me” – there’s a line in the song that goes ‘I’m always talking, chicken squawking’  and sure enough, there’s Jaco Pastorius playing exactly the sound of a chicken squawking on his beaten but astonishing-sounding Fender fretless jazz bass.

Then there’s the big moment, or to be more accurate, the big 16 minute moment. This is „Paprika Plains”. I’ve spent years puzzling about how to talk about „Paprika Plains”. It has obvious jazz influences, as much of her music does, but there’s so much more going on.  It opens with just piano and words, which over the years I’ve grown to love.  ‘When I was three feet tall and wide eyed open to it all, with their tasselled teams they came to McGee’s general store. All in their beaded leathers I would tie on coloured feathers. And I’d beat the drum like war.  I would beat the drum like war.’ The lyrics read like poetry.

The middle of the song is instrumental, with Joni Mitchell on piano and an orchestra. It took me a long time to properly understand and follow the movement of this piece, partly because I loved the beginning so much and partly because the end is so spectacular.  It probably needed a good enough system as well. What at first seems meandering and rambling, has movement and direction like a river. Then there’s the end section. The song begins again and the band plugs in. The band contains Jaco and Wayne Shorter, both from Weather Report; an extraordinary line-up of extraordinary musicians and the last few minutes of „Paprika Plains” is left to them. So dynamic, so focused and on a good system the speakers just disappear. The drumming is some of the best recorded I’ve heard and the saxophone as well, not to mention Jaco’s extraordinary bass playing. „Paprika Plains” is truly a piece of music you could spend years getting to know properly. Nigel Finn