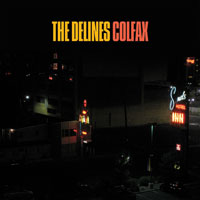 Colfax is The Delines’ first album. The Delines are the result of Willy Vlautin, writer of songs and books, the man responsible for Richmond Fontaine, one of the finest alt country bands in the world. In The Delines he joins forces with Amy Boone to produce a remarkable album, very soulful, dark but with distinct chinks of light and hope (certainly compared with The High Country, Richmond Fontaine’s last album).

Willy Vlautin has said that he always had songs like this he wanted to write but he knew he didn’t have the voice to sing them. Well Amy Boone does; sweet, soulful and with such depth. The band are pretty special as well, featuring Sean Oldham on drums and the wonderful Tucker Jackson on pedal steel.

Colfax, like so many of Willy Vlautin’s songs, looks at the hard, hard lives of American blue collar workers. What is so wonderful is the way he’s been able to write the songs on Colfax from the point of view of the women that feature in the songs and he’s been able to do it so well. Whether it’s The Oil Rigs at Night, a song about a loveless marriage, or the love and yearning of Wichita Ain’t So Far, these are songs about real people and real situations, and for all the yearning and hope of “Wichita ain’t so far away and your fingerprints on me have begun to fade”, there’s an awful lot of darkness on Colfax. It’s not always going to be the album that you reach for.

Music-wise, Colfax is classic Americana and very well recorded. Tucker Jackson’s pedal steel guitar playing is outstanding and the band are tight and always serving the tune. Recording and production are good as well, with plenty of space around the instruments and vocals. Amy Boone is put (deservedly) front and centre and the only thing missing (and you’d know this if you saw them when they toured recently) is a little bit more of Willy Vlautin.

This is great album and I hope there’s more to come from The Delines. It might not be the album to play if you’re feeling particularly heartbroken though.  Nigel Finn

Hi-fi cables – what are they for ?