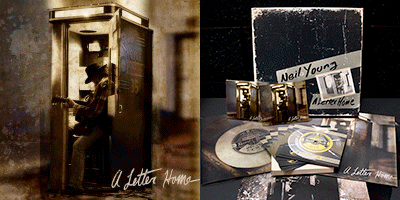 I love Neil Young. Have done so since I first heard After the Gold Rush and that was 44 years ago.  One of the things that has made me love the man so much is his determination to do exactly what he wants. After the Gold Rush was followed by Harvest, which was good (I know that the orchestra confused people) and Harvest was followed by On the Beach, an album that took a long time to be recognised for the masterpiece it really is. That’s a polite way of saying it alienated a lot of fans and his record company as well, and that’s the way it’s continued.

So now with PONO about to be launched, he releases A Letter Home, an album of covers recorded with Jack White, on Jack White’s restored 1947 Voice-O-Graph. I remember these from when I was a kid, a record-your-own-voice-direct-to-vinyl machine, about the size of an old red phone box. High fidelity it ain’t! A letter Home has received a fair amount of criticism for this. Dynamics? Nope. Bandwidth? Afraid not. You do get lots of wow (you can hear the pitch changing), cracks and pops, distortion, rumble and noise. In fact, why on earth play this on a hi-fi? Because once you put all of the above to one side and listen to the songs (not the hi-fi), A Letter Home is full of great songs, often dramatically transformed in feel and emotion and very direct and emotional. That then casts well known and much loved songs in a new light. These are mostly songs that Neil discovered, learned and played in his youth – and touchingly there are a couple of spoken tracks where Neil talks to his mother.

Bert Jansch’s Needle Of Death, a sad and mournful song of regret becomes desperate, broken and bitter.  Young’s plaintive whistling and frail voice (record-your-own-voice machines do no-one’s voice any favours), wringing the true awfulness of heroin addiction out of the lyrics. Gordon Lightfoot’s In the early morning Rain becomes quiet and worn and despondent and Dylan’s Girl from the North Country, tinged with bitterness.  Reason to Believe by Tim Hardin comes over all bar room piano and mouth organ. Another Gordon Lightfoot song If You Could Read My Mind sounds so frail and so direct and emotional.

That’s the point really about A letter Home. Never mind the quality, feel the emotion. Like any collection of good songs, play it on a good hi-fi and the songs sound better. Yes, I love good recordings, but I love good performances more and these are great performances.

One more song – Bruce Springsteen’s My Hometown – is for some reason one of the best versions I’ve ever heard, so do give this album a chance. You can put it on, safe in the knowledge that you won’t be worrying about image, or depth, or bass, or treble, or anything else like that. You’ll just be listening to music.  Nigel Finn

Hi-fi cables – what are they for ?  click here to find out who we are and why we do what we do