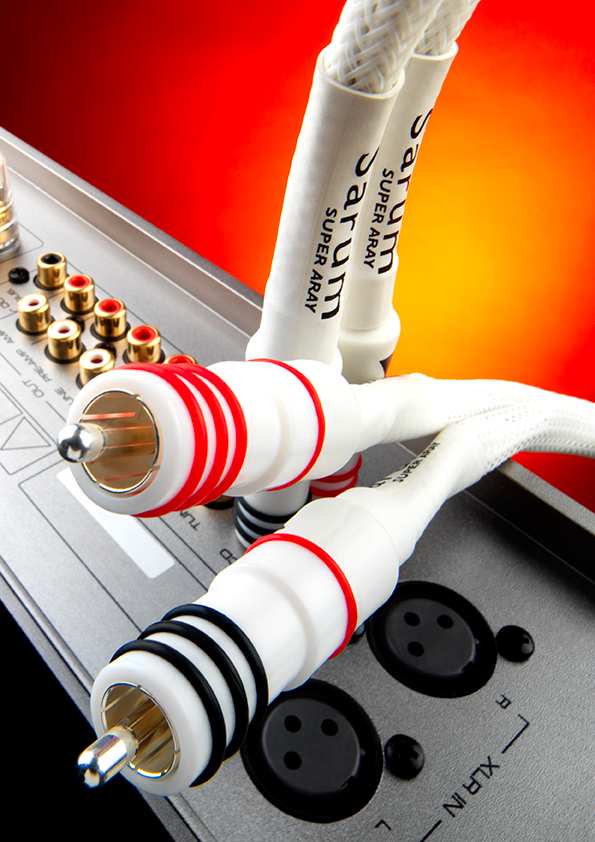 It was worth the wait. The Sarum Super ARAY RCA cable is finally available, so now the entire range is complete. That means DIN, XLR, RCA and any combination of those terminations are now available.

The new Super ARAY technology is a profound upgrade to performance in every way, making for a real musical experience – and the new PTFE plug surround is part of this big jump forward. The original development of Sarum Super ARAY was done using acrylic plug surrounds, so it was easy for us to understand what the PTFE plug surround brought to the performance of the cable. One of the most delightful things about the whole development process has been hearing the people, to whom we played the various development versions of Sarum Super ARAY, talking in terms of experiencing a performance, rather than listening to a recording. That’s the thing about the Sarum Super ARAY, it isn’t a sudden step change, it’s very much a continuation of Tuned ARAY.  There’s just more of everything to be heard. The extra degree of insight into music is quite remarkable. It’s not just hearing more detail, it’s being able to understand what that detail brings to the musical performance. A brilliant example is the bowing of a stringed instrument; the clarity with which this is revealed is really quite remarkable, be it Pablo Casals’ extraordinarily moving and emotional playing of Song of the Birds or Dave Swarbrick letting go with Fairport Convention on the ground-breaking album Liege and Lief. It makes for an even closer connection with your favourite music.

There’s another really important point here and that’s the real influence that cables have on systems. What the Sarum Super ARAY clearly illustrates is just how much cables affect the rhythm, timing and coherence of a system. Tuned ARAY technology forced us to look at the rest of our range of interconnects because of the transparency that it brought and Super ARAY moved that even further forward. Maybe it’s hard to say that music is a universal language but rhythm is a different matter. Rhythm and timing is what happens when good musicians play together; it’s a fundamental of a musical performance – something that Sarum Super ARAY clearly illustrates in a way that very few other cables can. That coherence will let you spend hours and hours listening to music. It ceases to become an ultimately fatiguing process and instead becomes something you can immerse yourself in – it requires no effort. You don’t have to be so picky about the albums you listen to either. Sarum Super ARAY isn’t going to hide a bad recording or an overtly compressed mastering but that timing and coherence and that transparency makes it so much easier to hear past that. So suddenly, it’s possible to play all those albums where you love the music but skip by them because of the sound quality.

We are a cable company. Of course we think cables are important and if you want to find out how important, you need to listen to a Sarum Super ARAY.